Ilenia Caleo is a performer, activist, and researcher. Since 2000 she has been working as an actress, performer, and dramaturg in the contemporary scene, collaborating with various companies and directors including Motus, Davide Iodice, Lisa Natoli.

With Silvia Calderoni, in 2018, she created KISS, a performance project with 23 performers, produced by Santarcangelo Festival and CSS Udine. Master Degree in Contemporary Philosophy, Ph.D. Fellow in Art and Performance Studies at Università La Sapienza (Roma).

The Orchester of transformation is project curated by the Locales and Visible collectives that combines contemporary artistic imagination with new action strategies for achieving the SDG objectives of the 2030 Agenda in the medium term. The theme of gender-based violence, action for the climate emergency and underwater life, and the overcoming of social inequalities are at the center of this edition for the city of Rome.

Initiated on the occasion of the launch of the Charter of Rome , and commissioned by the Palaexpo Special Company, the Orchestre della Transformazione project invites three international artistic and curatorial practices such as Cooking Sections , Jasmeen Patheja and Johanne Affricot (GRIOT) to rethink the artistic methods of intervention in public sphere to implement change paths and promote alternative imaginaries. Even in the face of the current pandemic situation, the team de le Orchester, in dialogue with the figures involved, has developed a different method of multifaceted artistic presentation, which involves the establishment of collaborations with local and international actors, the development of social campaigns and podcasts with a strong media impact and aimed at a wider audience.

The photographer Mohamed Keita, 28, from the Ivory Coast, arrived in Rome in 2010 as a political refugee after three years of travel between Guinea, Mali, Algeria, Libya and Malta. His encounter with photography represented a turning point and it soon became a profession, which Mohamed decided to share with others using art as an urban research tool and as a means of social transformation. For him, photography represents an exchange, rendering, listening and participation 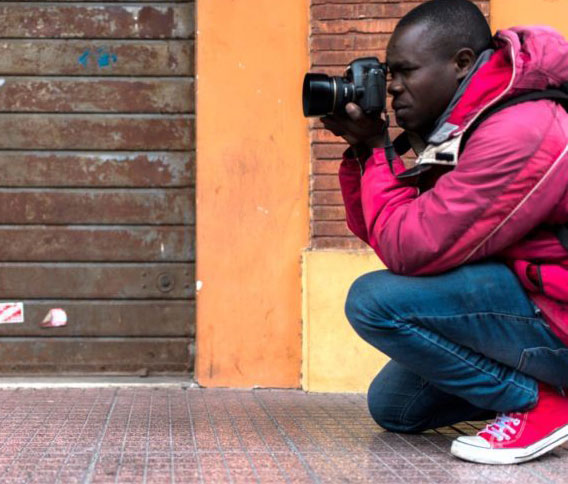 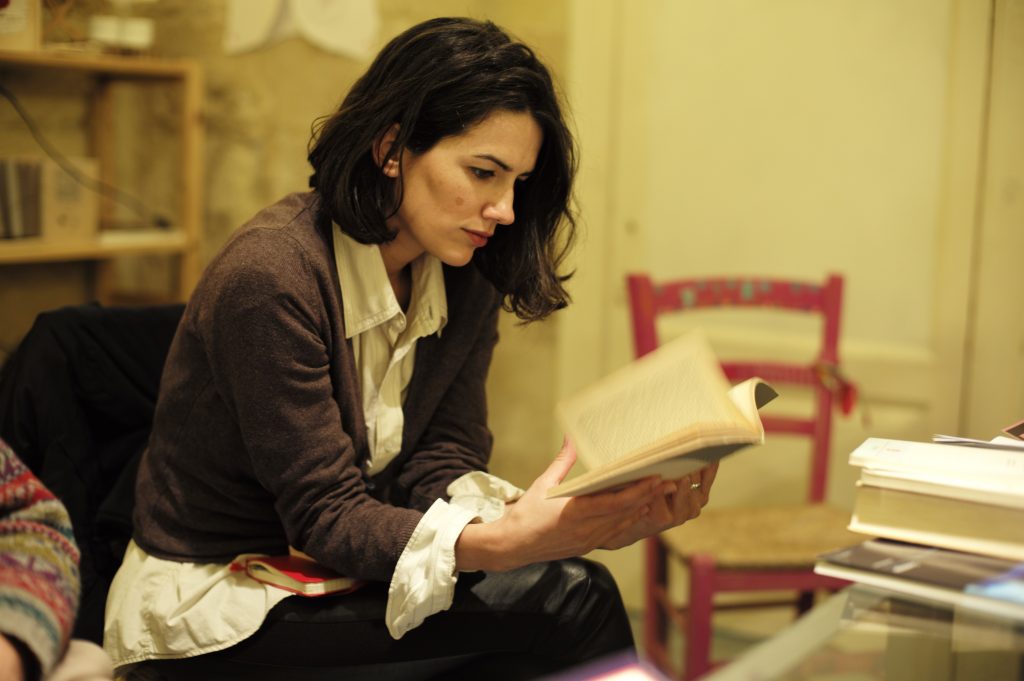 Sara Alberani is an art historian, activist and independent curator based in Rome. Graduated in Art History at Sapienza University of Rome, she attended ULB in Brussels and CuratorLab in Stockholm. She expresses her curatorial practice in socially engaged art and in artistic projects in relation to communities and public space, including currently the project for documenta15 together with the community of asylum seekers, refugees and activists of Trampoline House, Copenhagen.

Francesca Corona lives between Rome and Marseille. She is curator and producer in the field of contemporary performing arts, general manager and co-curator of Short Theatre, a performing arts festival born in Rome in 2006. A temporary community to imagine future possibilities and new alliances that extend beyond disciplinary, geographic and cultural borders. Since 2005 together with PAV – independent promotion and production organization – curating and managing several promotion projects for Italian performing arts abroad, such as Face à Face, a bilateral French-Italian project in collaboration with, among others, the Festival d’Automne, Actoral Festival in Marseille and Théâtre Garonne in Toulouse. 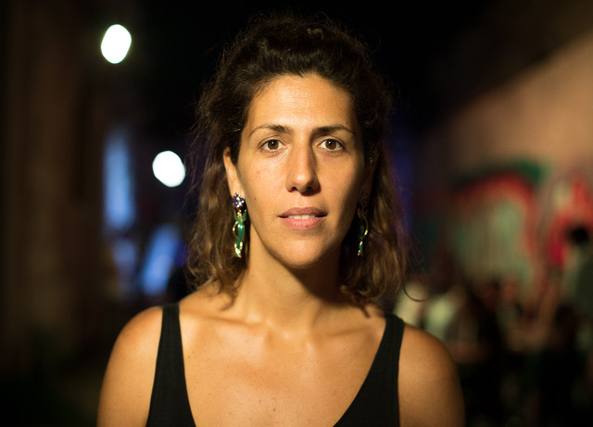 DOM- is a research project born in 2013 from the collaboration between the artists Leonardo Delogu and Valerio Sirna. Over the years, other * artists * have expanded and transformed the conformation of the collective according to the project: Hélène Gautier, Mael Veisse, Arianna Lodeserto. DOM- investigates the language of the performing arts, contaminating it with the militant approach of the Environmental Humanities and with the instances and imaginaries of eco-anarcho-queer practices. The research revolves around the relationship between bodies and territories, investigating the knot of permeability and observing how power, nature, culture and marginality interact in public space. 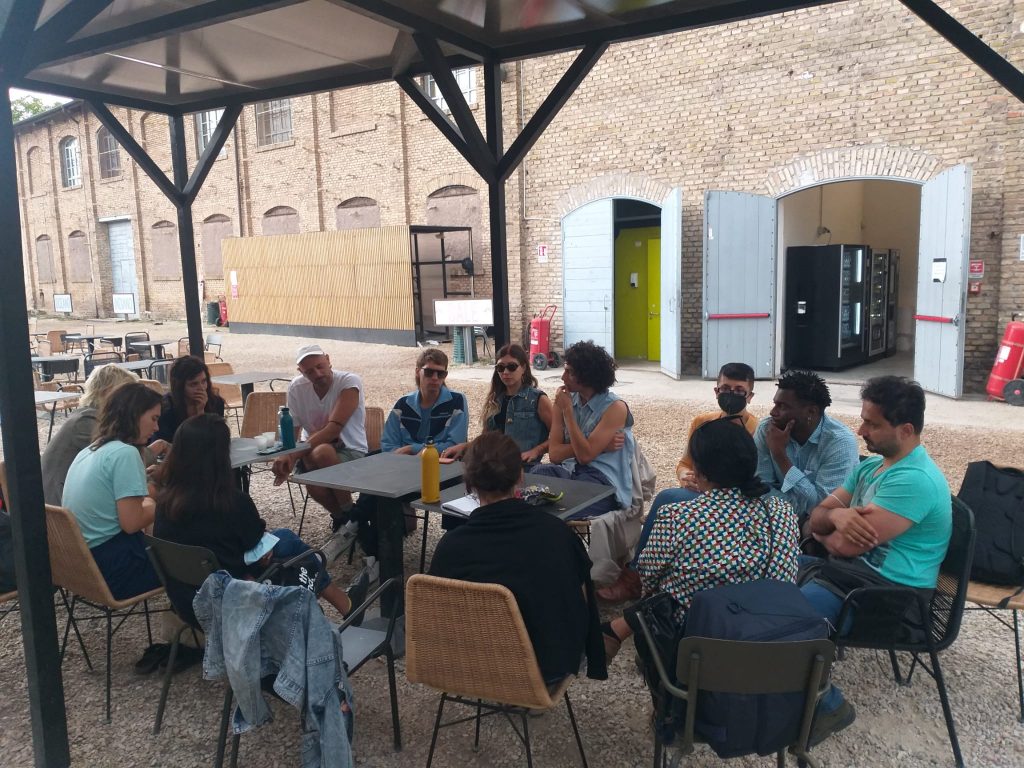 Erika Z.Galli and M artina Ruggeri met in 2005 and gave life to INDUSTRIA INDIPENDENTE (the Indipendent Industry project) , a research collective dedicated to the performing and visual arts. Their artistic process crosses different languages and practices, in an uninterrupted search for affinity, skin sensitivity and gaze.

The theater is the first place where they shape their practice, as authors and directors. Together with the theater, they carry out a research process linked to performing art and visual art, creating performative environments and hybrid formats, including: Dunno_analoghìa superpower (2018), Attika (2019 and ongoing) and Merende. Their works focus on articulating certain issues: the relationship between human beings and nature, the dimension of «unproductive» time, the construction of alternative and fictional worlds in which to build communities and alliances, the continuous overturning and recreating of individual identities and collective.

S.I.R. is a group of dancers and performers based in Rome, which promotes meetings aimed at dance and performing arts professionals, to create a network for the exchange of skills, knowledge and artistic paths . These “horizontal” meetings (between peers, peer to peer) called sharing, aim at sharing practices and training methods on the body and movement, supporting a research environment. The project, born in 2017 in SCUP (Sportculturapopolare), is located in various Roman spaces and was also a guest of «Panorama Roma 2019», of «Short Theater 2019» and «Re- surface festival 2019». 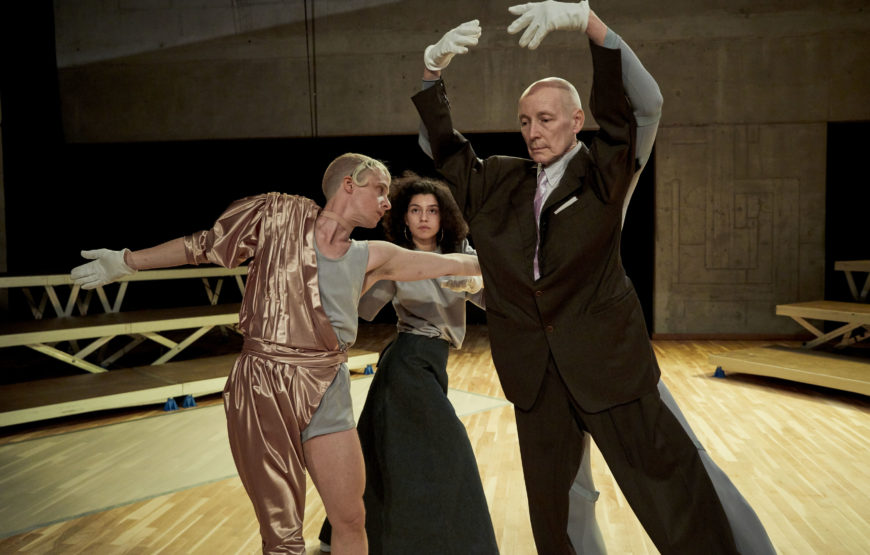 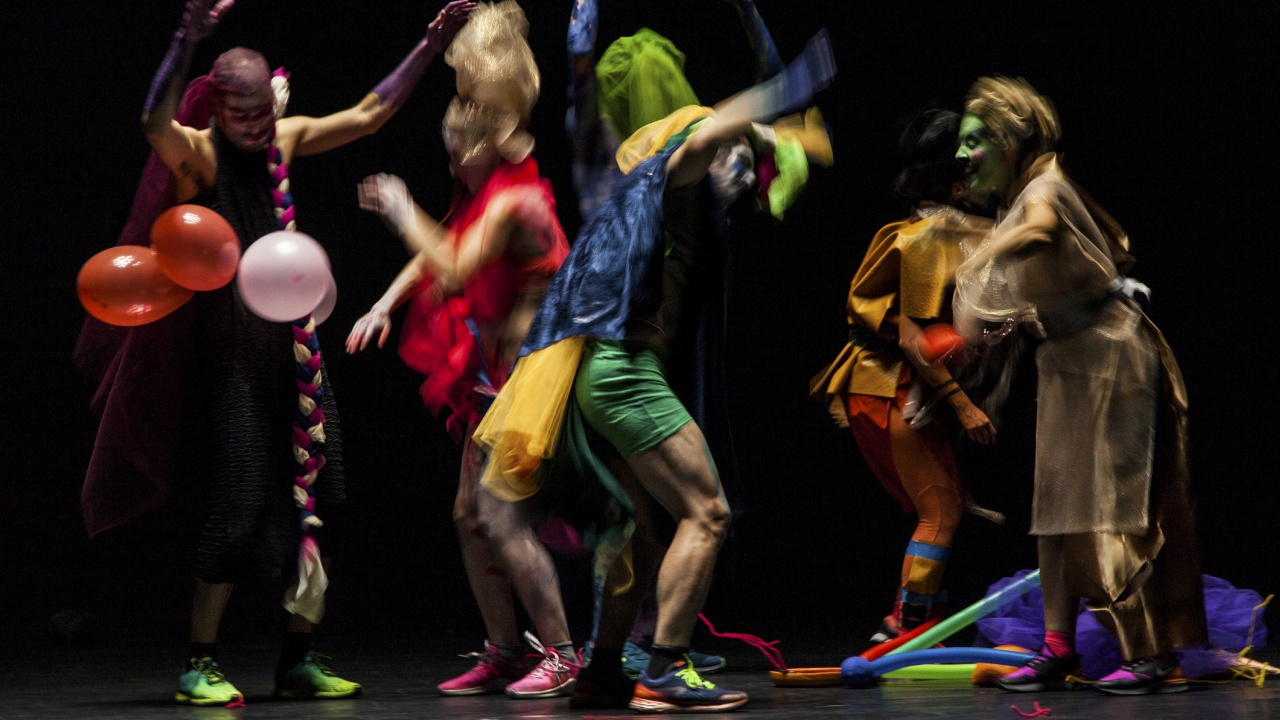 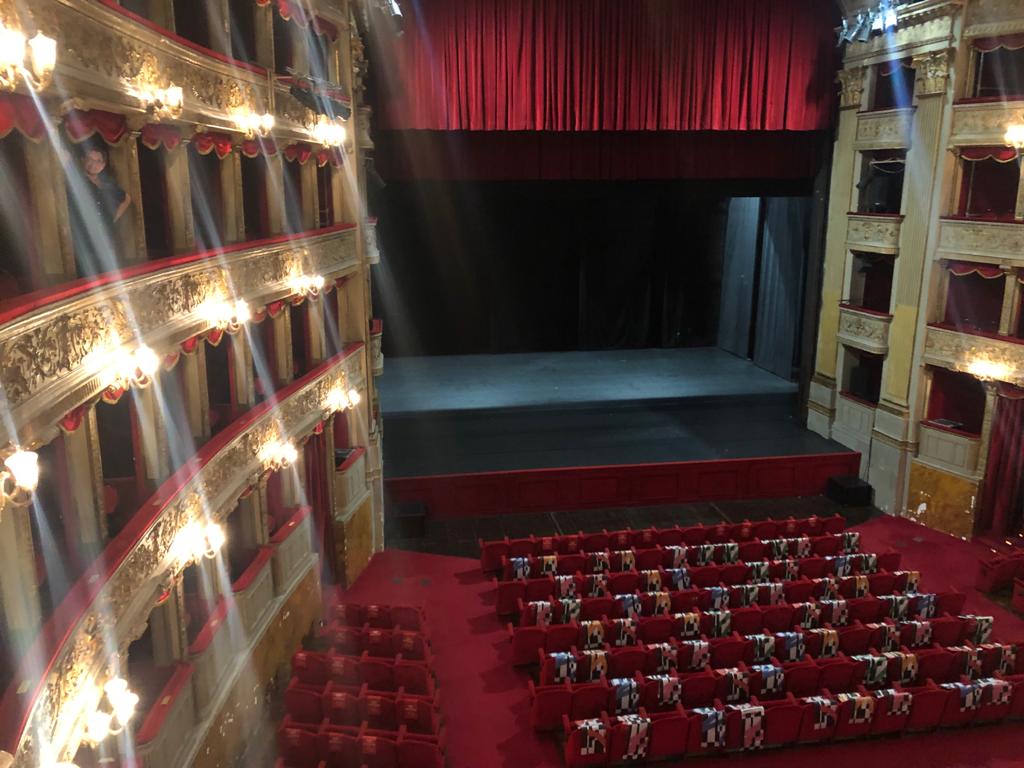 INFRA’s invited artists were invited to several shows during their stay in Rome, in which one of our participants’s premiere performance Il Mio Filipino, by Liryc De La Cruz.

IL MIO FILIPINO, FOR THOSE WHO CARE TO FEEL by Liryc De La Cruz

This multimedia performance centers on reconnecting the exhausted and colonized body to the earth and soil, and claiming processes of taking care of the body and their connection to nature through rituals and knowledge from indigenous Filipinos. It poses the question on whether and how we can decolonize the enslaved and overexploited body. Is it possible to unlearn the colonial legacies embedded in gestures of care ?

Can we emancipate the enslaved bodies, and why ? 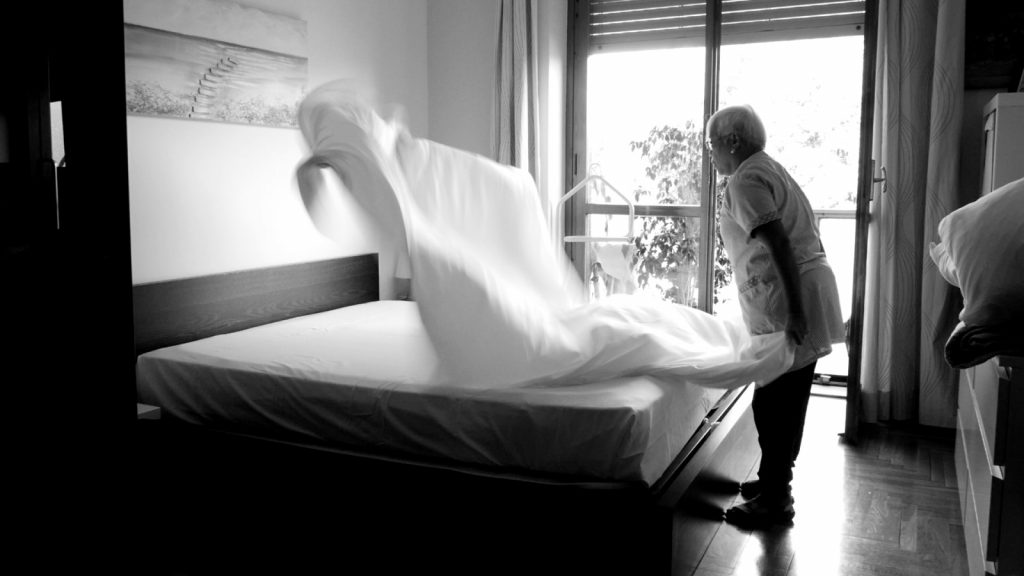 Tutto Brucia is a rewriting of Euripides’ Trojan women – through the words of JP Sartre, Judith Butler, Ernesto De Martino, Edoardo Viveiros de Castro, NoViolet Bulawayo, Donna Haraway – which adds a piece to the excavation, completed from the company, of the figures of the tragic. The Trojans begins with an ending. The conflict is behind us, Ilio has already been destroyed. What remains, among the ruins, are the ghosts of the past that still stir the present.

DISCORDA is an entirely acoustic and live sound system, made up of voices, interference, strings, percussion, will accompany visitors to discover the restored stretch of the Walls.

The contemporary thus confronts the Ancient, in a timeless journey that becomes a reinterpretation of the urban space. The Walls become a sound box and natural reverb to relaunch the sound towards the inside but also towards the outside. Inscriptions made in plaster, inspired by Latin epigraphs, will be installed in different points of the upper part of the walls, also in relation to the place and sound to offer more solicitations to the eye and the imagination.

MAMMA ROMA is an antidisciplinary project started in 2014 which is based on the exercise of walking, intended as an instrument of knowledge and sensitive reading of the surrounding, and on the relationship that binds the body to the landscape it crosses.

With our questions always in our pockets and the playlist at the cash desk, we return to cross the public space, to interrogate the continuous assemblages of the urban. We will touch the buildings of Quadraro, Certosa and Centocelle, resonating with ghost ruins, apocryphal remains, aqueducts, tunnels and reeds, railways and car demolitions. 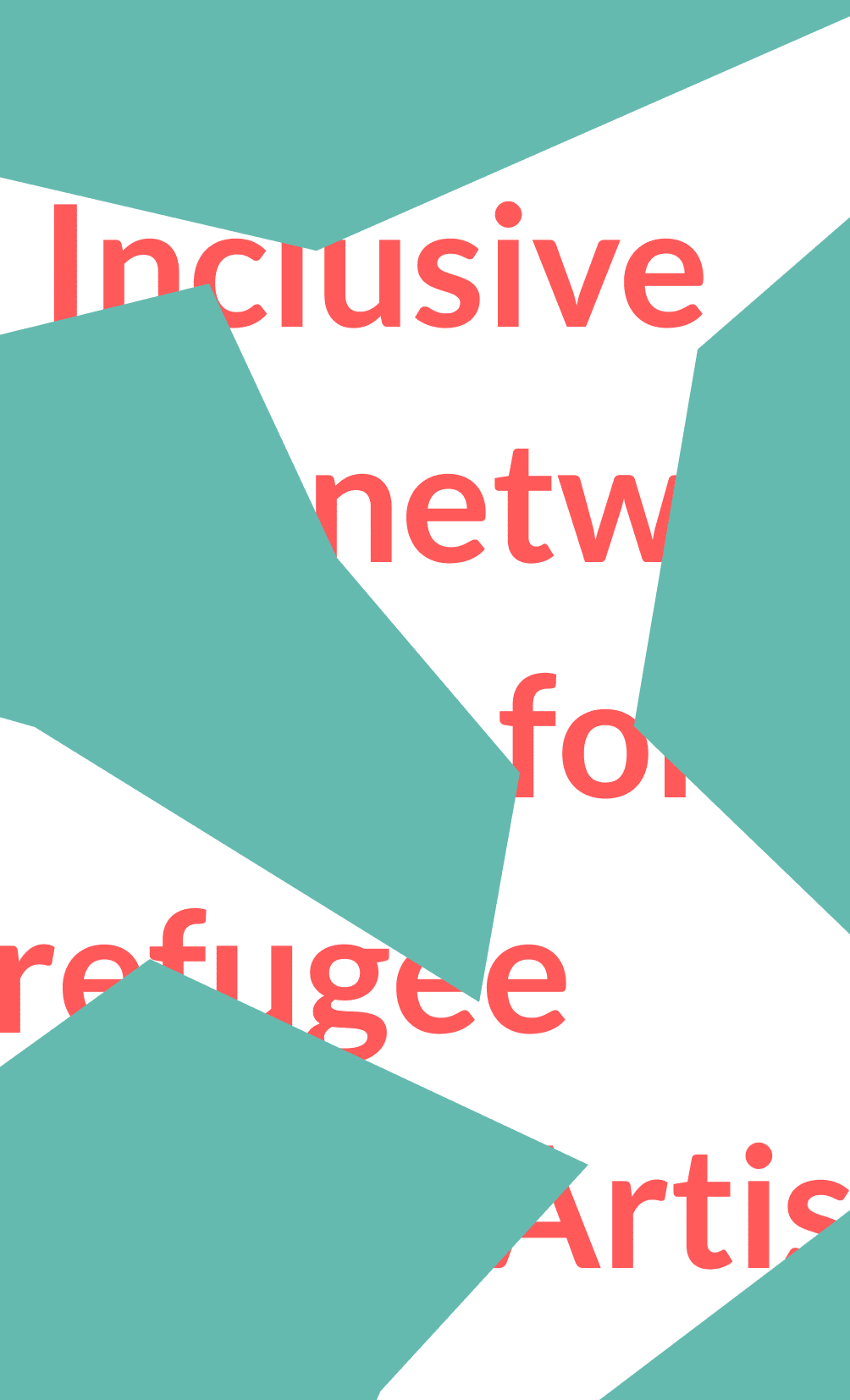